She Sells Seashells On The Seashore... 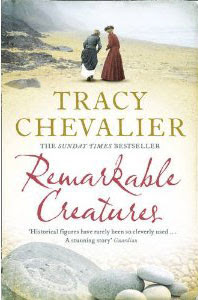 On the back of the book:
On a windswept English beach in the early 19th century, two women make discoveries that change the world. And in doing so find friendship, pride – and trouble.

From the moment she’s struck by lightning as a baby, it is clear Mary Anning is different. Her discovery of strange fossilized creatures in the cliffs of Lyme Regis sets the world alight. But Mary must face powerful prejudice from a male scientific establishment, not to mention vicious gossip and the heartbreak of forbidden love. The – in prickly, clever Elizabeth Philpot, a fossil-obsessed middle-class spinster – she finds a champion, and a rival. Despite their differences in class and age, Mary and Elizabeth’s loyalty and passion for the truth must win out…

Remarkable Creatures is a fictionalised account of the life of Mary Anning (1799 – 1847), a woman from Lyme Regis whose fossil hunting skills produced specimens that would revolutionise the world of science and question the religious view of creation itself. Now a highly respected figure in Palaeontology, she never received the full recognition she deserved for her discoveries in her lifetime. The Natural History Museum in London displays many of the fossils she uncovered in the cliffs around Lyme Regis, now correctly attributed to her.

The development of Geology as a science is an integral part of the story in Remarkable Creatures. Many distinguished scholars owe a considerable debt to Mary Anning as she provided such luminaries as Henry De La Beche, Louis Agassiz, William Buckland and William Conybeare with the fossils on which they built their scientific reputations. 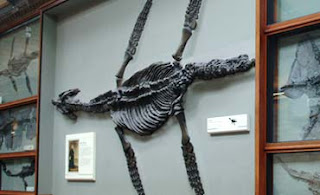 (C) Natural History Museum
The story focuses on the friendship between Mary and Elizabeth Philpot (1780 – 1857), how they met when Mary was still a child and how their shared love of fossils created a strong bond between the pair. Mary is the girl in the tongue-twister nursery rhyme “She sells seashells…”. Elizabeth Philpot was something of a mentor to Mary, encouraging her to read about geology and to follow a scientific method in recording and documenting her finds. A strong theme throughout the book is how, because of their gender, their lives were severely restricted by the social mores of their era.

The narration of events switches between Mary and Elizabeth, told in the first person. For me, this worked well as we get to see both sides of the friendship and gain insight into each woman’s life. Despite the difference in age and class, they eventually found a balance with each other. Elizabeth, a middle-class, middle-aged spinster, sent away to live with her 2 unmarried sisters by her married brother, is the dominant voice and it is through her we see the constraints placed on women, especially unmarried ones, in this period of history. 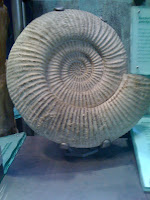 “Mary Anning and I are hunting fossils on the beach, she her creatures, I my fish. Our eyes are fastened to the sand and rocks as we make our way along the shore at different paces, first one in front, then the other. Mary stops to split open a nodule and find what may be lodged within. I dig through clay, searching for something new and miraculous. We say very little, for we do not need to. We are silent together, each in her own world, knowing the other is just at her back.”

While I thoroughly enjoyed reading Remarkable Creatures, I was irritated by the romance between Mary and Colonel Birch. It seemed contrived to me, and not necessarily in keeping with the rest of the book. That aside, the detail of everyday life in early 19th century England showed Tracy Chevalier’s commitment to research and it made the personalities shine through. Mary and Elizabeth are strong, likeable characters who make the most of the world in which they find themselves. Despite differing levels of education, Mary being mainly self-taught, the women have keen intellects and questioning minds that try to make sense of Mary’s finds in the context of their religious teachings and the nature of God. This was a period where the Biblical Creation myth was largely unquestioned until the discoveries by Mary Anning and others. I enjoyed this side of the book knowing that ideas that were discussed contributed to Charles Darwin’s thinking on evolution.
Posted by Cara at 17:32