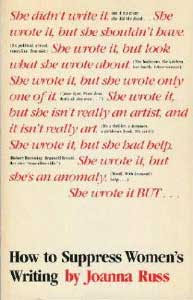 I have been following (and contributing to) the online debate about Women in SF. This was discussed at this year's Eastercon and has been a hot topic recently on Twitter, the Guardian Books blog and various review blogs and author's websites. This has long been a favourite topic of mine (see my post from March 2010 'My Top 40 Female SFF Writers') and it has been very reassuring to see so many people, not only acknowledging that there is indeed inequality within the SF publishing world but who are prepared to do something about it. As Nicola Griffith wrote on her blogpost 'Taking the Russ pledge'

"The single most important thing we (readers, writers, journalists, critics, publishers, editors, etc.) can do is talk about women writers whenever we talk about men. And if we honestly can't think of women 'good enough' to match those men, then we should wonder aloud (or in print) why that is so. If it's appropriate (it might not be, always) we should point to the historical bias that consistently reduces the stature of women's literature; we should point to Joanna Russ's How to Suppress Women's Writing, which is still the best book I've ever read on the subject. We should take the pledge to make a considerable and consistent effort to mention women's work which, consciously or unconsciously, has been suppressed. Call it the Russ Pledge. I like to think she would have approved."

What has surprised me is the number of people who profess not to care about the gender of the authors they read. In an ideal world, this would not be an issue, but we live in a culture where there is still a significant gender imbalance, and not just in the world of SF publishing. There are noticeably few women in the UK who are currently under contract to publish SF, indeed they can be counted on one hand [note: the US situation is better and some UK writers are published there but their books are only available here as imports e.g. Karen Traviss].


Maybe it is time to wake up and take some action, however small, in an attempt to redress the balance... that is all the Russ Pledge is asking. But denying that there is a problem or just ignoring the issue will not improve the situation. And unless things improve for women wanting to write SF, we will all lose out.
One of the positives that have resulted from this debate has been a new blog SF Mistressworks, set up and maintained by Ian Sales. I have contributed 2 reviews to date (Grass by Sheri S. Tepper and The Word for World is Forest by Ursula K.Le Guin). It is a valuable resource, highlighting books written pre-2000, that may have been forgotten, overlooked or are out of print.
Some further reading:
Torque Control: SF by Women, 2001 - 2010
SF Signal: Mind Meld: What's the Importance of 'The Russ Pledge' for Science Fiction Today? (some of the comments are jaw-dropping!)
SF Signal: Guest post by Judith Tarr: Girl Cooties: A Personal History (again the comments are worth reading)
Nicola Griffith: Feminist SF conversations worth reading
Guardian Books blog: The Incredible Shrinking Presence of Women SF Writers by David Barnett
Cheryl Morgan: Female Invisibility Bingo
Posted by Cara at 10:30