Saturday 3rd April 2010: First I must admit I had never been to a convention before and was slightly nervous as I approached the hotel near Heathrow airport. I need not have worried as I was immediately greeted by a group of fellow bloggers and tweeters in the foyer. It was at this point, at the start of the day, where I was introduced to Mark Charan Newton and the man next to him, Joe. This turned out to be Joe Abercrombie of Before They Are Hanged fame, and to my later embarrassment I did not recognise him at all. Introductions over, I collected my day pass and was handed a goodie bag. Now that was a pleasant surprise! Along with a mug, pen and assorted bumf, was a free book; D.B.Shan’s Procession of the Dead, no less, his first foray into adult fiction.

Then it was off to the first panel discussion: “Female Superheroes – WhyAren’t There More of Them?” It was a shame this was scheduled so early (9am) as there were few people present. A larger audience would have provided more debate and possibly challenged the panellists. These included Sam Sykes, author of the forthcoming fantasy adventure Tome of the Undergates and Paul Cornell, double Hugo Award nominee and future Guest of Honour at Eastercon 2012, alongside Esther Friesner and Roz Kaveney. I am not a comic/graphic novel fan, and while some salient points were made about how the genre is improving, I was not really convinced that the negative female stereotypes no longer predominate…

Panel over, it was off to the treasure trove that is the Dealer’s room. Books, books, shiny silver trinkets and more books! In amongst the stalls were some amazing and friendly people. I spoke to Jaine Fenn, author of Principles of Angels and Consorts of Heaven, about how I am eagerly anticipating the release of the third in the Hidden Empire series in September 2010. I was introduced to Aliette de Bodard, who wrote Servant of the Underworld (which I reviewed here), by Lee Harris of Angry Robot Books, currently the hottest book imprint in the UK at the moment. 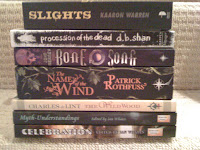 And I chatted about which Doctor Who was the best with Rob Shearman, who wrote “Daleks” for the Christopher Eccleston Doctor (my own favourite was Jon Pertwee, closely followed by Colin Baker). He was at the British Science Fiction stall with a group of guys who persuaded me to buy 2 short story collections after we all agreed that K9 was a mistake! The collections are both edited by Ian Whates; Celebration, including stories from Stephen Baxter, Jon Courtenay Grimwood and Alastair Reynolds; the other is Myth – Understandings, a collection of stories by women including Storm Constantine, Sarah Pinborough and Gwyneth Jones. Other books I picked up throughout the day, as I just couldn’t resist popping back to the Dealers room, were The Name of the Wind by Patrick Rothfuss, Bone Song by John Meaney, Slights by Kaaron Warren and The Wild Wood by Charles de Lint.

The afternoon panels I attended were both internet related. The first was "Writers and the Web" and the panellists were Joe Abercrombie, Mark Charan Newton, John Meaney and Maura McHugh. This was a lively debate where the power of the web to promote both authors and books was discussed. The role of book bloggers in particular was highlighted alongside the ability of the internet to bring authors closer to their readership through their personal websites.

The third and last panel was "Bridging the Gap: SF/F and Social Media". It was recorded and broadcast as #livecon and the panellists were Paul Cornell, Loudmouthman, and David Devereaux and chaired by the excellent Danie Ware from Forbidden Planet. Twitter was particularly relevant to the debate as it transpired that around 70% of the people in the room were actively tweeting throughout. 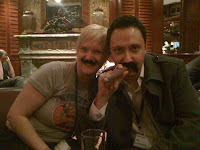 When not at panels or browsing the bookstalls, a group of book bloggers held court in the Polo Lounge bar. This, for me, was the best part of the whole experience. I had arranged to link up with two fellow convention novices: Amanda from Floor to Ceiling Books and Jason from Kamvision [left]. Having conversed via Twitter for a while, it was great to meet them in person. They are part of the team behind the very useful new resource Scrying the Fantastic, which posts “forthcoming releases in the field of speculative fiction”, and they are both very passionate and knowledgeable about books! As were Adrian (@Figures) and Adam (@Ghostfinder) [below right] with whom I had some fascinating discussions. I also got to meet @Nextread at last, Gav being one of the first people I ‘met’ on Twitter and through his Nextread website I discovered the world of book blogging. 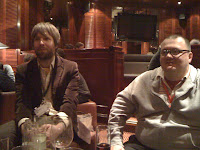 The biggest revelation to me, as a convention novice, was how approachable and friendly the authors were. I was in awe at the breadth of talent contained within one hotel. While I admit I did not recognise many faces other than those I have encountered through Twitter, my wishlist has suddenly lengthened as a direct result of meeting so many gifted and interesting writers. It’s not everyday you find yourself discussing Java in a bar with Tony Ballantyne, or admiring Alex Bell’s new shoes!

Having time to reflect on the bus home, I found myself admiring a friendly and open community, filled with intelligent and thoughtful people, all with a shared love of books and speculative fiction. For me, Eastercon opened my eyes to a whole new world, one where I can indulge my reading habits and have discussions on the merits, or lack thereof, of Stephen Donaldson’s Thomas Covenant character. I have caught the convention bug…I’ll be back!
Posted by Cara at 23:55